The iMac is a low-cost version of Apple Computer's Macintosh. It was designed to attract people who have never owned a personal computer as well as win back former Mac users who have moved to personal computer. It allows users to play blu-ray files, blu-ray discs on it so as to experience the most wonderful blu-ray home cinema effects. Released in mid-August, 1998, the initial version of the iMac featured a sleekly-molded designer-colored translucent case with a built-in 15-inch display, a fast 233 MHz processor, and the Mac OS operating system. Traditionally, somewhat higher in price than Intel-based PCs, a low-priced Mac symbolized Apple's determination to compete in and increase its share of the personal computer market. Apple is advertising the iMac as easy to set up and ideal for simple applications and surfing the Web (the "i" stands for "Internet", it also represents the product is a personal and revolutionary device, for 'i' also means "individuality" and "innovation"). Sales have exceeded expectations.

iMac adopted the most advanced desktop display and high-performance technologies. Yet it’s just 5 mm thin at its edge with up to 40 percent less volume than the previous generation.

Being made 75% less reflective, re-architecting the LCD and moving it right up against the cover glass, it allows you to see photos, games, movies and everything in lifelike detail.

This slimmest iMac boasts fourth-generation Intel Core processors, faster NVIDIA graphics, Thunderbolt I/O, and an advanced Fusion Drive option, the high-performance technologies made it the most powerful and easy to operate.

Users can get great apps for everyday things such as emailing, surfing the web, sending texts, making FaceTime calls and there’s even an app for finding new apps.

OS X is the operating system that gives you a fully integrated system in which everything works together seamlessly. The multi-touch feature, which needs to purchase additionally, enables you to tap, scroll, pinch, and swipe with your fingers and makes you feel perfectly natural. 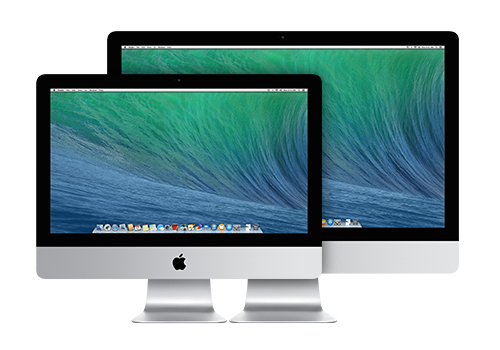 1-     The first Intel-equipped Macs were unveiled on January 10, 2006: the Intel iMac and the introductory MacBook Pro. Apple smoothly transferred the entire Macintosh line to Intel within nine months.

2-     On July 27, 2010, Apple updated its line of iMacs to feature the new Intel Core processors across the line and offered an option to use a solid state drive instead of a large mechanical drive.

3-     On May 3, 2011, Apple updated its iMac line with the introduction of Intel Thunderbolt technology and Intel Core i5 and i7 Sandy Bridge processors as well as a 1 mega pixel high definition FaceTime camera, which were firstly introduced in the MacBook Pro line in February 2011.

4-     On October 23, 2012, a new iMac was announced with a substantially thinner edge, new Apple Fusion Drive, faster processors (Intel Core i5and i7 Ivy Bridge) and graphics along with updates to the ports, but with the same overall depth (stand depth: 8 inches (20.3 cm)). To reduce the edge, the SuperDrive was removed on these iMacs.