What is Mac Pro?

The Mac Pro line is a series of Intel Xeon–based workstation and server computers manufactured by Apple Inc.  Mac Pro is the most powerful computer of Apple in terms of speed and configurations. It allows users to play blu-ray files, blu-ray discs on it so as to experience the most wonderful blu-ray home cinema effects. It is the high-end model of the three desktop computers in the current Mac lineup, the other two being the iMac and Mac Mini. 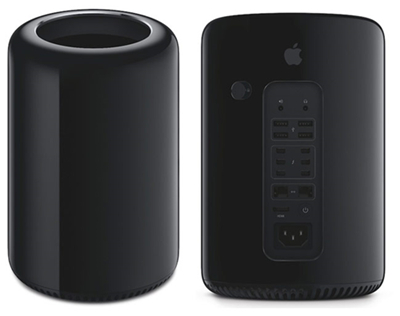 Mac Pro resembled the last version of the Power Mac G5 with similar expansion capabilities. An Intel-based replacement for the PowerPC-based Power Mac G5 machines had been expected for some time before the Mac Pro was formally announced on August 7, 2006 at the annual Apple Worldwide Developers Conference (WWDC). The first Mac Pro was based on dual Dual-core Xeon Woodcrest processors. It was replaced by a dual Quad-core XeonClovertown model on April 4, 2007, and again on January 8, 2008 by a dual Quad-core Xeon Harpertown model. The 2012 Mac Pro was largely based on a model that was announced on July 27, 2010. It features Nehalem/Westmere architectures Intel Xeon processors. They offer options of up to 12 processing cores, up to four optional 2 TB hard disk drives / 512 GB solid state drives and ATI Radeon HD 5770/5870 graphics.

The second generation model was announced at the Apple Worldwide Developers Conference (WWDC) opening keynote on June 10, 2013 and released on December 19, 2013. In a radical departure from first generation's rectangular tower case, the redesigned Mac Pro is shaped like a cylinder and takes up about one eighth the volume of previous models. Beyond form, the machine supports up to a 12-core Xeon CPU and four 1866 MHz DDR3 RAM modules, as well as dual GPUs and PCIe-based flash storage. Apple claims that the new Mac Pro achieves twice the performance of the last model.