3GP is actually the abbreviation for 3GPP (Third Generation Partnership Project). It is the format used by the new mobile phones as the format for media files. More specifically, 3GP is the file format that is used for video streaming through the mobile phone, making it possible for those using this file format on their mobile phones to watch videos and even create videos. The 3GP file format stores video streams as MPEG-4 Part 2 or H.263 or MPEG-4 Part 10 (AVC/H.264), and audio streams as AMR-NB, AMR-WB, AMR-WB+, AAC-LC, HE-AAC v1 or Enhanced aacPlus (HE-AAC v2). 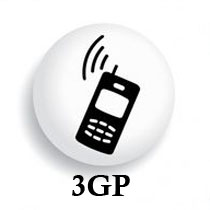 3GP file format is a container format for media files, and this means that one file can contain several different files and also different kinds of files formats, which is a great advantage. Additionally, the 3GP file format has an even smaller Bandwidth and file size than the MP4 to fit it all in the comparatively lower memory space of the mobile phone.

2-      Some newer/higher-end phones without 3G capabilities may also play files and record things in this format (again, with said limitations). Audio imported from CD onto a PlayStation 3 when it is set to encode to the MPEG-4 AAC codec will be copied onto USB devices in the 3GP format.