SWF is an Adobe Flash file format used for multimedia, vector graphics and Action Script. Originating with Future Wave Software, then transferred to Macromedia, and then coming under the control of Adobe. SWF files can contain animations or applets of varying degrees of interactivity and function. Currently, SWF is the dominant format for displaying "animated" vector graphics on the Web. It may also be used for programs, commonly browser games, using Action Script. 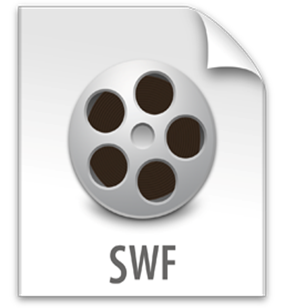 What does it do?

The .SWF Flash media container extension is one of the most popular available on the Internet. SWF stands for Small Web File. It was originally created as a file extension for Flash-based vector graphics and simple sequential animations and it used to stand for ShockWave Flash. Later, the .SWF extension became more complex and now it is a dominant file format which contains all types of Flash media (including audio and video). The .SWF file can be used for showing Flash animation based on vector and raster graphics, for different forms of interaction with the end user - Flash menus, Flash buttons, Flash banners, and more. Also, it can contain Flash applets, which provide control for other Flash elements. For example, it can contain a Flash player applet that will provide advanced timeline and volume controls for a Flash-based .FLV movie clip.

How to create an .SWF file for my website?

The .SWF extension is a proprietary format of Adobe Flash, however, because of its popularity there is a long list of software products which can generate .SWF files with Flash-based animations and applets for your website. In the first place, we need to mention some products from the Adobe Creative Suite - Adobe Premiere, Adobe Flex, Adobe Captivate and more. Also, there are various Flash button creation software solutions and movie convertors/editors which generate .SWF Flash graphics as an output. Some good examples are the popular screen capture software - Camtasia, all Amara Software products, and more.